Lessons from the past

We had a mini renovation with a couple of new furniture. So dad was busy shifting stuff from his old cabinet to the newer one. He was throwing away some old useless stuff, but sometimes old stuff are definitely not meant to be thrown away… and he passed me something to keep it forever… or rather he passed it to the next generation.

A tiny functional film camera or rather a World War II Japanese spy camera with the printed words Made in Occupied Japan. The object is fascinating and so is the story of how and why this ended up with Sweska.

Dad remembers fondly how grandpa actually cut out small film and inserted into the camera to test it out. The camera still has the shutter when pressing the tiny button. Grand pa and dad had loads of unique and interesting hobbies and I really love to hear such stories that are being passed down from generation to generation. Stories about grand parents and sometimes even great grand parents… they are so close and yet so far… 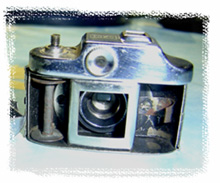 This camera is such a story. My grand father bought this small camera from the grandson of a WWII fighter named Ahmed Ali dad said. He was a soldier from the Ajad Hind Fauz during World War II who fought against the British. So how did he have a Japanese Spy Camera? I don’t know but I do know that Ajad Hind Fauz collaborated with the Japanese to drive away the British since obviously because the British and Japanese were enemies… remember history?? 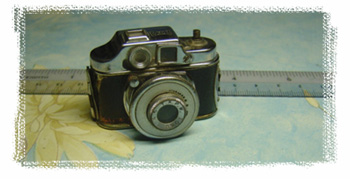 It is interesting to note that this army force led by Netaji did come to Singapore when it was occupied by the Japanese. So, while Singapore was fighting against the Japanese, some Indians were collaborating with them… this reminds me…

One man’s terrorist is another man’s patriot